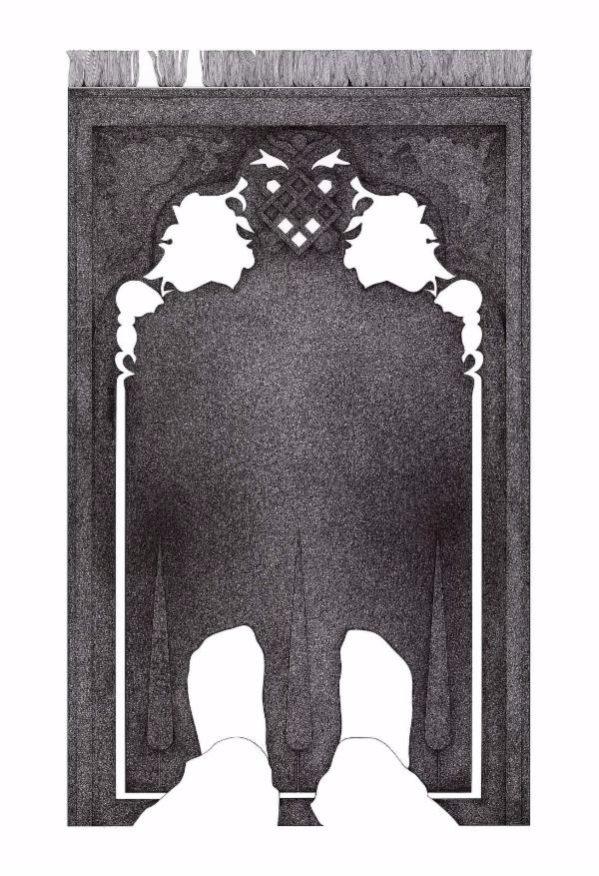 What if some religious objects could reflect back an individual’s prayer as an image? What visual symbols might people possibly see in their own prayers? The relationship between the Prayer and The Praying Mat raises questions through Jamal’s work: What does a ‘Prayer’ really mean to a particular 'Person'? How does it manifest in real life? How does it affect others' lives? Does it subvert the original purpose of the mat by not relating to the functionality of it? 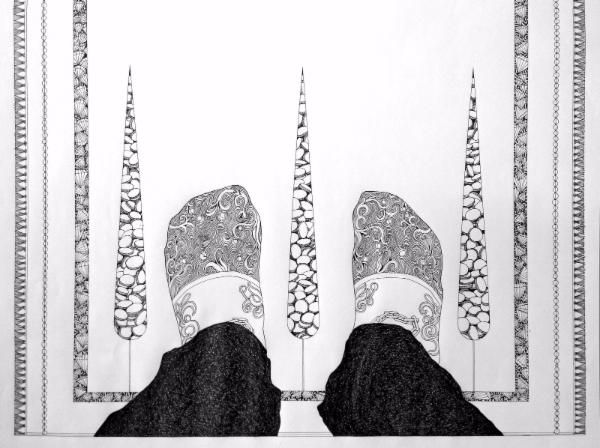 'The Autographic Prayers' is a series of works that embody reflections that take their roots from the artist’s childhood in Pakistan. In this recent work, Jamal has shifted his practice from automatic drawings to ‘autographic’ drawings. His previous work was based mostly on the surrealists’ subconscious mind and was more random in nature. He used the psychological phenomenon of 'Pareidolia' in which the mind is let to perceive familiar patterns on visual surfaces. This series is based on planned visual interpretations from his personal experiences. The coined term 'autographic drawing' does not deal with the subconscious mind as much as it deals with his memory and identity. The recent developments have made his practice more intriguing by looking into the notion of ritualised praying and its visual metaphors. A praying mat characterises the home of any practising Muslim. Jamal could not stop seeing images in the abstract decorations that characterise these praying mats. Now he has turned his imagination back to these mats with the deliberate intent to present images. These images work as visual metaphors and aim to critique hypocritical contradictions in some acts of ritualised praying that exist within his community. 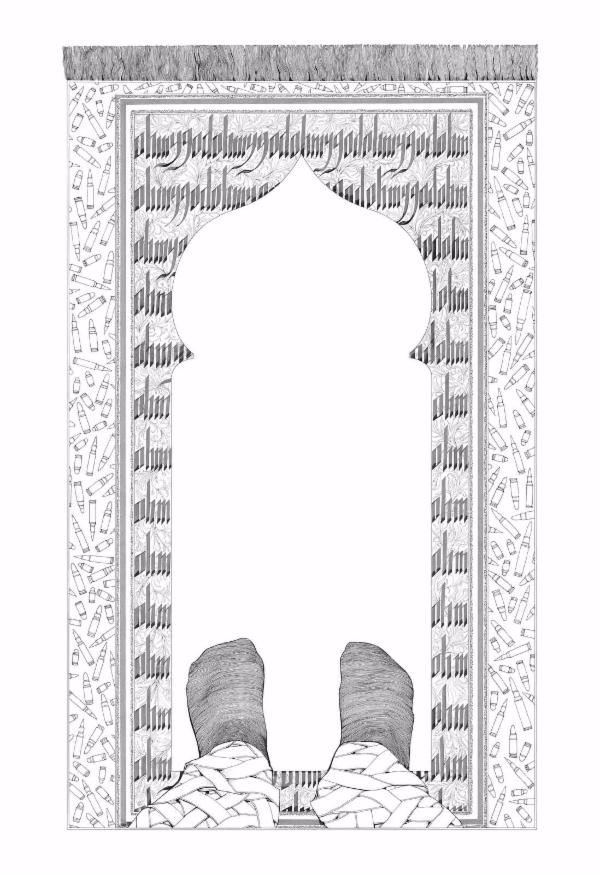 How can someone who glorifies himself as a religious person and offers prayers five times a day, take innocent lives at the same time? What praying experience is he actually going through? What visuals is he perceiving on these rugs? The artist finds that it was not just the orthodox religious narrative that causes the problem, but it becomes more dangerous when a religious connotation is combined with a cultural falsification, or when religion is used for indoctrination or for political motives. It really matters what one is taking to their own praying mat, the 'Act of Praying' changes shapes according to the individual’s aims, ambitions, intentions, and religions. In a constructed reality, a praying carpet loses its strength of sacredness and becomes an inconsequential flimsy piece of material, belying the fragility of the man’s intentions. 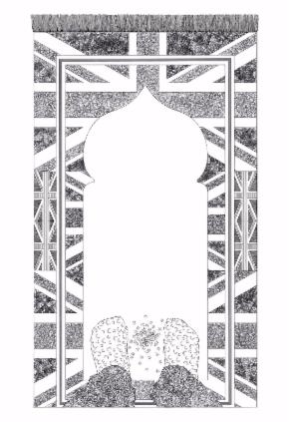 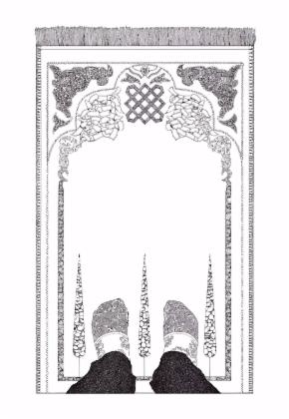 In a multi-cultural society, co-existence of multi-faiths is a contemporary challenge, and is echoed repeatedly in the media. As a British-Pakistani artist, Jamal’s opinion about religious extremism is that educating in an intelligent way to ‘kill the distorted religious narrative’ can be more effective and conducive than to tackle it through strong legislation or confrontation. A generation of a few vulnerable individuals were taught a narrative of ‘killing in the name of religion.’ This threatening narrative needs to be condemned first from within by a counter narrative and wiped off The Praying Mats. Brushing issues under the mat from one side or rolling back the carpet from the other won't help in integration. Making the dark and busy mat clean and simple can greatly help solve the serious issue of human lives. Each destructive incident adds more insecurity, due to the wrongful acts, wishes, and prayers of others. Jamal has tried to augment these contemplative issues using his drawings with an intention that it may initiate a discourse with the viewers. 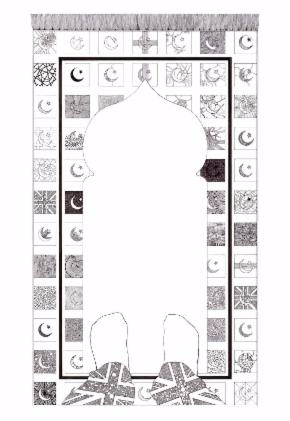 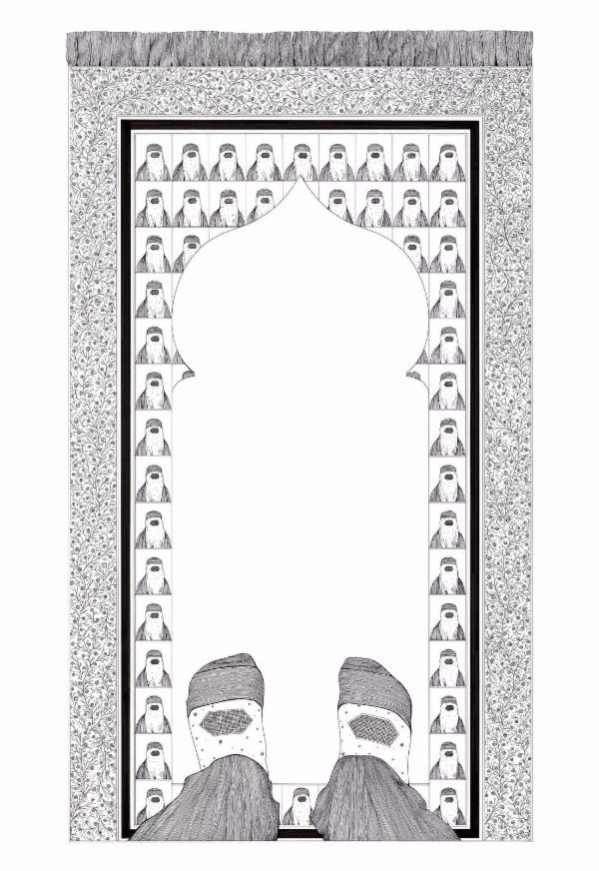 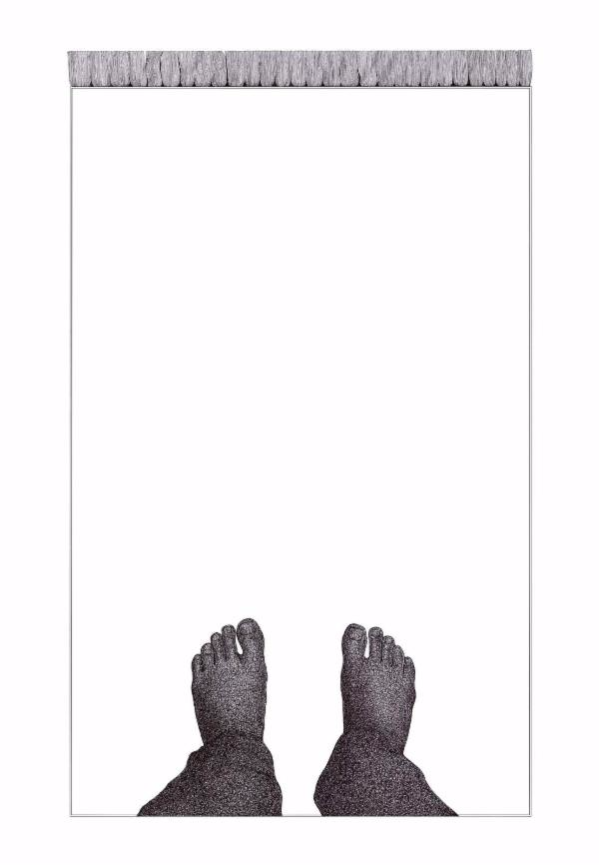 A Line Drawn from the Eye to the Summit - September 2015,